A Huge Outdoor “Streatery” is in the Works for Downtown DC

A Huge Outdoor “Streatery” is in the Works for Downtown DC

Downtown DC restaurants have been hit particularly hard in the pandemic with Capital One Arena and museums closed, tourism down 53 percent, and offices filled to a mere five percent capacity. But there’s a plan underway that aims to draw more dining interest downtown. Cuba Libre founder Barry Gutin and the DowntownDC BID dreamed up a new kind of “streatery” that would operate more like a communal outdoor dining room for six participating restaurants, all of which could prepare special food and drinks on site. If approved by the city, the al fresco venue, dubbed Dine Out on 8th, will take over a stretch in Penn Quarter on Eighth Street between H and I streets, Northwest.

“The idea isn’t just to get more seats, but create a critical mass to attract visitors,” says Gutin, who created an expansive outdoor parklet patio at Cuba Libre with plants and seating for 80 guests. “The problem with downtown is you don’t have any one street with compressed bars and restaurants. That’s why we’re trying to create this common area.”

Unlike in a neighborhood like Adams Morgan, where restaurants serve patrons directly in front of their businesses in parklets along 18th Street (no pedestrian zone yet), the businesses participating in Dine Out on 8th will set up mobile kitchens, serving stations, and/or bars to accommodate diners who may be eating blocks from their actual restaurant. Gutin says it’s a challenge, but also an excuse to create creative, attractive offerings like a pig roast or festival-style paella cooked outdoors in a giant pan—minus, of course, the festival itself.

“This is being built from the ground up to control crowds,” says Gutin. All guests will require a reservation, order and consume food and drinks seated at tables, and be required to wear masks in accordance with DC regulations. Portable restrooms, hand washing and sanitizing stations will be set up.

Plans are still in the works and awaiting approval by DDOT and others, though DowntownDC BID president Neil Albert feels confident about its viability moving forward. Participants so far include restaurateur Ashok Bajaj’s new spots Olivia and Modena, Cuba Libre, and new Spanish-Japanese restaurant Cranes. Albert says they’re also in discussion with José Andrés’ ThinkFoodGroup, which operates four restaurants in the neighborhood. The project, which may cost the BID upwards of $60,000 for furniture, tents, storage, sanitization procedures, and other fees, is also seeking sponsorships, and has already landed support from Bacardi and PepsiCo. If approved in its current phase, the space could hold up to 400 seats (though Covid gathering limits would be strictly observed).

“Even with streateries and patios, most restaurants are, at best, operating at 25 to 30 percent of their regular business,” says Albert. “It’s barely enough to keep folks alive. Hopefully this gives people another reason to come downtown.”

See an example of the current plan below: 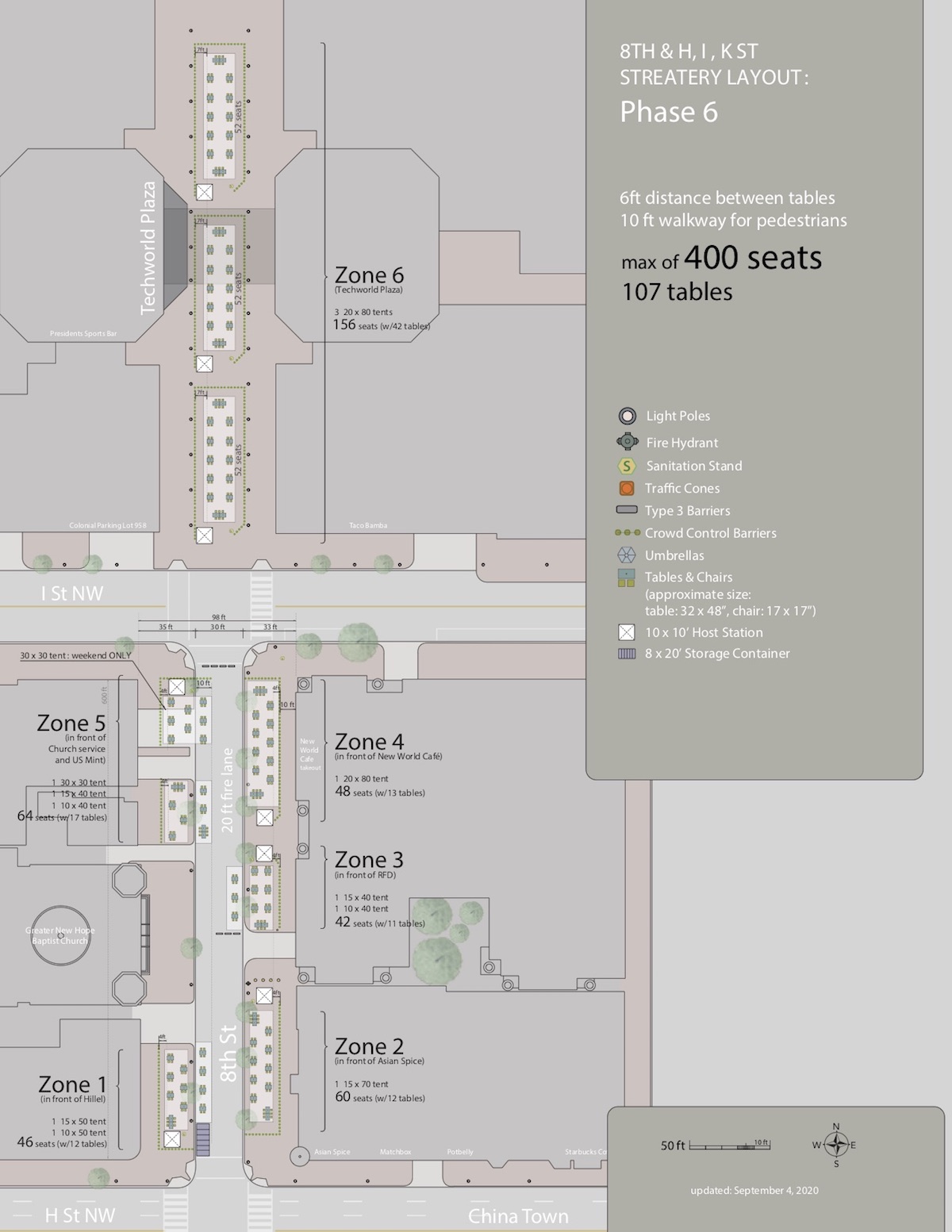