The National Children’s Museum is officially open. After a series of delays, the art and science center began welcoming visitors this week. Originally set to open last November, the museum in the Ronald Reagan Building and International Trade Center was delayed by a slow-moving federal permit process, according to its CEO and president, Crystal Bowyer. Here’s what you need to know before you go.

The museum is located at Woodrow Wilson Plaza, just steps from the Federal Triangle Metro stop. There’s also parking available in private garages a short distance from the museum, and a public parking garage at the Ronald Reagan Building. You can access the garage from either 13 1/2 St., Northwest, and Pennsylvania Ave., or via two other entrances on either side of 14th St., Northwest, between Pennsylvania and Constitution avenues. Rates vary per hour.

The main entrance on the second floor is still under construction, and Bowyer says it will be completed in the coming weeks. For now, guests will enter through the lower level, which will eventually be the entrance for school groups. For that reason, the museum will temporarily sell a smaller number of tickets. Visitors can buy tickets online and walk-up tickets are available in limited numbers based on capacity. For adults and children over the age of 1, general admission tickets cost $10.95. There are also memberships available starting at $130.

The museum is open from 9:30 AM to 4:30 PM daily, and guests who buy tickets online will reserve a time slot. They can arrive up to 30 minutes prior to their scheduled time.

Over the past few months, the museum invited local kids to come beta-test their exhibits. “You learn a lot when kids start playing with things,” says Bowyer. “You learn, ‘Okay, they’re gonna tug on this, they’re gonna try to take that home.’” Bowyer says the museum used that time to make adjustments and fine-tune aspects of the exhibits, which include a PAW Patrol-themed play area, and a collaboration with Microsoft that allows children to practice simple coding exercises that change the colors of lights and displays on a nearby three-story climber called the Dream Machine, all rooted in STEM learning concepts and incorporating the arts.

The museum will also host visiting exhibitions that will rotate every three to six months. Currently, it’s hosting Dora and Diego: Let’s Explore! The interactive exhibit features programming in both English and Spanish. 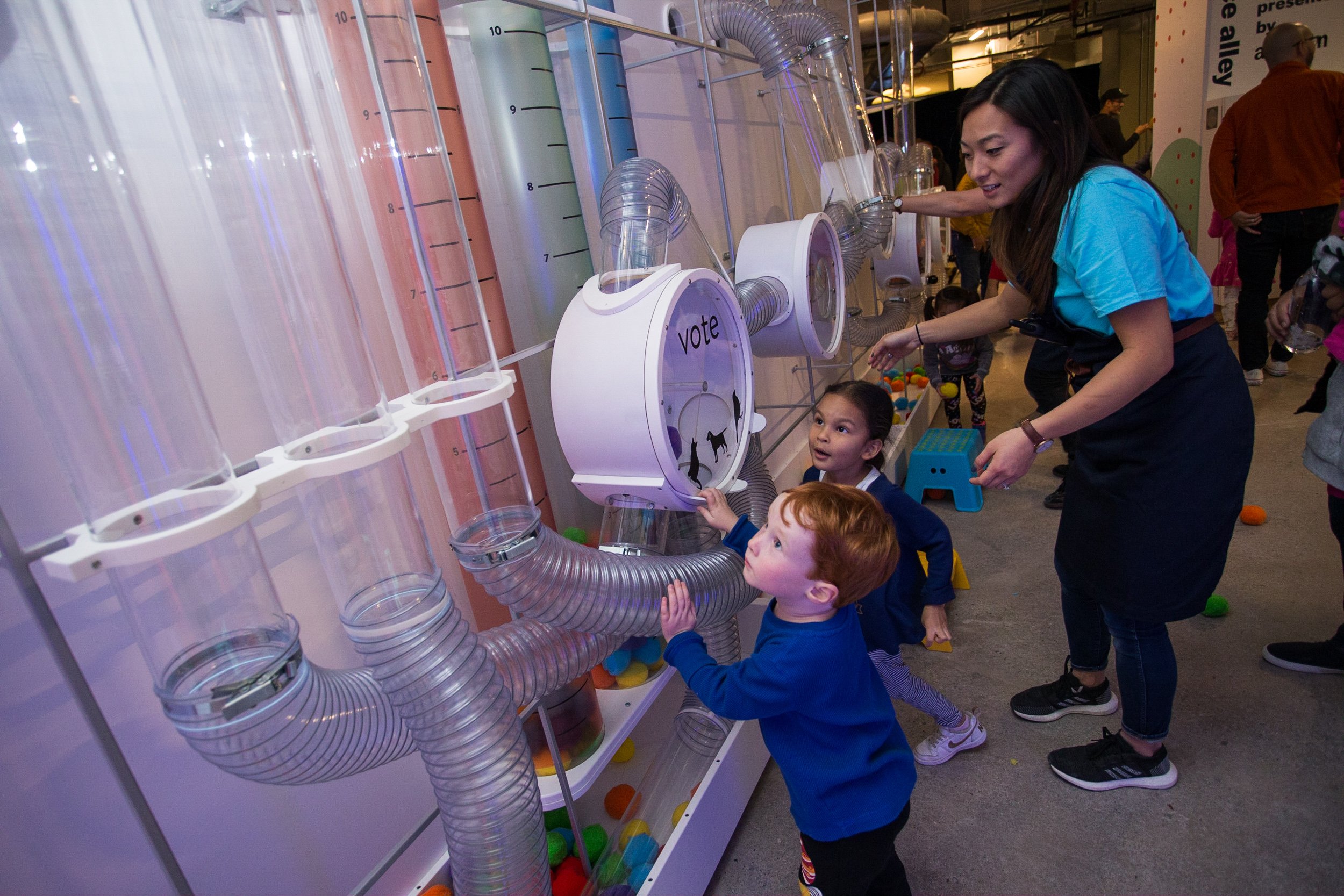 While much of the focus is on tech-focused, future-facing exhibitions, the museum did revamp a beloved feature of the former Capital Children’s Museum: the bubble room. Kids–and nostalgic adults–can tug a pulley that creates a bubble around themselves.

Some aspects of the space are still undergoing last minute tweaks. As I walked through the space, I saw that a quiet room designed to give tired kids a break is not yet complete, and a wall made large white blocks around one of the play areas will eventually be replaced by a more permanent version. The museum is part of this year’s National Cherry Blossom Festival, which runs from March 20 to April 12, and Bowyer says most everything will be done by then.

It’s a work in progress, and she says she expects the museum will outgrow its current 33,000 square-foot space, and expand elsewhere in the Reagan building.

A Bluestone Lane cafe is slated to open upstairs in June. In the meantime, guests can visit the Ronald Reagan Building’s food court, which serves pizza, sandwiches, and more–though you’ll have to go through the building’s security screening process. Visitors can also bring their own snacks.